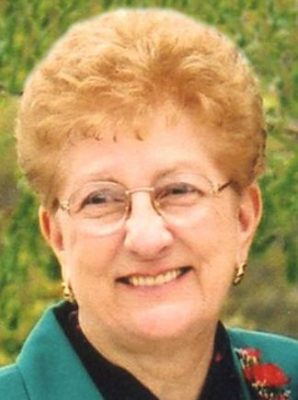 Cryilla was a hard working farm wife who came from the generation that went through the Great Depression and the Second World War and went from kerosene lanterns to computers. With her husband Bill she experienced the joys and challenges of farm life and of raising a large family. Along with working on the farm she worked at Pick Manufacturing, Schloemer Law Office, and Cedar Lake Community.

In her free time Cryilla enjoyed playing sheepshead with her family, gardening, canning, attending her grandchildren’s activities, and baking her famous apple slices.   She was a big promoter of her husbands, children’s, and grandchildren’s bands and music. Cyrilla’s family and extended family will remember her get-it-done attitude, feistiness, devotion to family, love for her family’s polka music, and to her Catholic faith.

The Thull family will greet relatives and friends at the church on Sunday from 1:00 p.m. until the time of Mass.

In lieu of flowers, memorials to St. Michael Catholic Church or a charity of your choice are appreciated.

The Thull family would like to extend their heartfelt appreciation to Cedar Lake Community Staff, and Cedar Hospice for the wonderful care they provided to their mother.