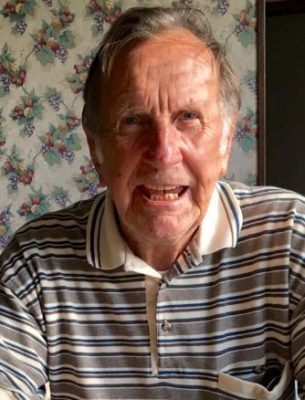 He was born on June 14, 1930, in Milwaukee to the late Frank and Lillian Graff (nee Ollinger). On April 25, 1952, Merlin married the love of his life and best friend Carol Marschke in Whitefish Bay. Merlin honorably served in the U.S. Army during the Korean Conflict. He was a carpenter and built many homes, including his own.

Merlin enjoyed everything involved with racing, working in his yard, watching John Wayne movies and the Packers. But above all, he cherished the time spent with his family.

Merlin was preceded in death by his parents; his wife, Carol; four brothers, and two sisters.

The family will greet relatives and friends at the funeral home from 4:00 p.m. until the time of the service.  Burial will be held on Saturday, August 19, 2017 at 10:00 a.m. at Washington County Memorial Park in West Bend.

In lieu of flowers, memorials are appreciated in Merlin’s name to The Stars and Stripes Honor Flight or to St. Jude’s Hospital.

Merlin’s family would like to thank the doctors, nurses, aides, and angels at Froedtert Hospital for their compassionate care and support.

The Myrhum Patten Miller & Kietzer Funeral Homes has been entrusted with Merlin’s arrangements.