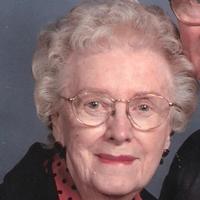 For many years, she worked as a secretary and bookkeeper for an insurance agency in Milwaukee.

In the early 1990’s, she and Earl moved to Mountain where they made their home. Since June, 2016, they have lived in West Bend.

She loved cooking, gardening and crafts. Throughout the years, she knitted and crocheted many pieces, including wash cloths, afghans and scarfs.

In addition to her parents and her first husband Henry, she was preceded in death by 2 brothers Fred (Jean) and John, Jr. (June).

Funeral services will be held on Thursday, March 23 at 2:30 p.m. at the Schmidt Funeral Home in West Bend with Rev. Joseph Fisher officiating. Burial of the cremated remains will be in Wisconsin Memorial Park, Brookfield. The family will greet relatives and friends during a period of visitation at the funeral home on Thursday from 1 until 2:15 p.m.