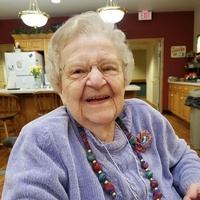 She was born December 29, 1919 in Green Bay, Wisconsin to the late Lamont and Arleen Ewalt.  Elaine lived in Green Bay until her marriage to Bob Kauth in January 23, 1943 at Camp Maxey in Paris, Texas.  Elaine met Bob while he was attending college at St. Norbert College in De Pere, Wisconsin.  Elaine and Bob lived in West Bend after his deployment to Europe during WW II and raised their five children.  Elaine had been a member of St. Frances Cabrini Church since 1956.

Elaine was a loving and caring wife, mother, and homemaker. She enjoyed working as a part-time bookkeeper for her husband and other businesses. She  will be deeply missed by her five children; Mike of Denver, Co., Kathy (Bob) Dums of Denton N.C., Patti (Dave) Bavlnka of Sun Prairie, WI, Jon (Kay) of West Bend, and Arleen ‘Dolly’ (Tom) Steepy of Colgate, WI.

Elaine was preceded in death by her husband Bob, sisters Lorraine and Lois, daughter-in-law Ellen Kauth, and great-grandchildren Nicholas and Tyler Overbay.

Elaine enjoyed life and her family. She will be remembered for her cooking and baking special desserts and cookies and humming her favorite songs.  She also loved listening to Big Band music and playing bridge. She was an avid Green Bay Packer fan and enjoyed watching Lawrence Welk.

Memorial services will be held on Monday, February 5 at 2 p.m. at the Schmidt Funeral Home in West Bend with Rev. Justin Lopina officiating.  Inurnment will follow at Washington County Memorial Park.  The family will greet relatives and friends at the funeral home on Monday from 1 p.m. until the time of the service.

In lieu of flowers, it is suggested that memorial donations be made to the “Service Dog Project” 37 Boxford Road, Ipswich, MA 01938, in Elaine’s name. SDP trains and provides Great Danes to children and adults with mobility issues and to veterans with PTSD at no cost to the recipient. You may also choose a charity of your choice.

The Family would like to Thank the wonderful  staff of  The Waterford at West Bend and  Heartland Hospice for  the support they provided Elaine and her family.