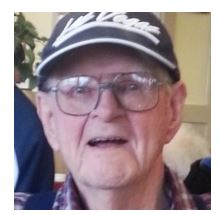 He served in the U.S. Army during World War II from 1945 until 1947. He worked with construction equipment from 1947 until 1950.  In November of 1950 he began his career at Gehl’s in West Bend on the evening shift until his retirement in 1990.  He also drove school bus and cement truck part-time for 16 years.

He was united in marriage to Lois H. Dickman on September 3, 1949 in West Bend. She preceded him in death on October 18, 1996.  Ellsworth moved to New Lisbon in 1998 and lived with his brother Raymond.  He enjoyed going to the casino; he also enjoyed listening and dancing to polka and country music.

In addition to his wife he was preceded in death by 4 sisters, and 5 brothers.

A Graveside Funeral Service will be held on Saturday, December 2, 2017, 10:00 A.M. at the Holy Angels Cemetery, West Bend with Military Honors.