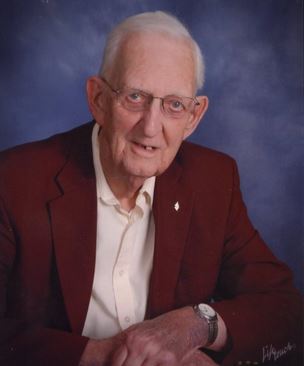 Frank was born on July 3, 1922, in Minneapolis, MN, the son of the late Franklin and Beatrice (nee Rader) Walbrink, Sr. He graduated West High School and attended the University of Minnesota. He honorably served in the United States Army from 1942 through 1945. Frank was united in marriage to Verna Danielson at First Lutheran Church in Fargo, ND on December 21, 1944. Verna preceded Frank in death on December 23, 2011, after 67 years of marriage.

Frank was in sales management for 27 years at Texaco and 10 years at Jacobus Company. He was member of Ray Dickop American Legion Post 36, West Bend Masonic Lodge, Kiwanis Club, and St. James Episcopal Church, West Bend. Frank was thrilled to have participated in an Honor Flight to Washington DC, which honored veterans of World War II.

In his free time Frank enjoyed stamp collecting and traveling. He also enjoyed spending time with family and friends. He will be missed by all who knew him.

The Walbrink family will greet relatives and friends at the church on Saturday from 11:30 a.m. until the time of service.

n lieu of flowers, memorials to the St. James Episcopal Church Foundation and Shriners Hospital for Children are appreciated by the family.