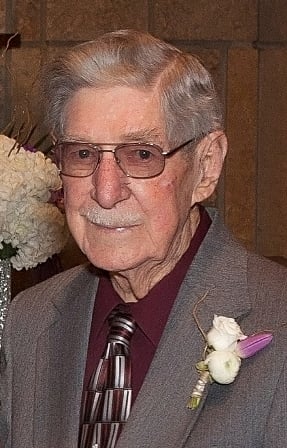 Ivan G. Schulz, 90, of Lomira, formerly of Campbellsport, passed away on Sunday, September 25, 2016, at Hope Senior Living surrounded by his loving family.

Ivan farmed for a number of years, did plumbing and heating work before he started working at West Bend Equipment where he worked for 25 years. He was a former member of Beechwood Fire Department and Beechwood Sportsmans Club.

In addition to his parents, Ivan was preceded in death by a sister, Marjorie Krahn; three brothers-in-law, Arno Luedtke, Jerome Schmidt, and Gaylord Krahn.

A funeral service for Ivan will be held at 3:00 p.m. on Sunday, October 2, 2016, at St. Lucas Evangelical Lutheran Church in Kewaskum. Rev. Timothy Henning will officiate and burial will follow in Lutheran Memorial Park in Kewaskum.

Ivan’s family will greet relatives and friends at the church on Sunday from 1:00 p.m. until the time of service.