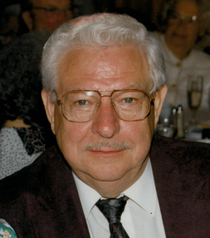 Born in Milwaukee on July 18, 1924, Jack grew up in several locations in Milwaukee, Ozaukee and Washington Counties.  During World War II he worked at the Wisconsin Chair Factory where he met his future bride, Doris M. Ansay. After the war ended, the couple married and settled in Saukville where they built a home on Clay Street.

Jack worked as a salesman for the Junger’s Stove Company in Grafton, Wisconsin. Weekends were filled with softball, fishing and attending to his growing family. When the life as a traveling salesman became weary the couple moved the family to Hubertus where they ran a tavern and grocery store.  Years later, the family operated several Piggly Wiggly grocery stores in Washington and Ozaukee County under the family name of Hansen’s. After retirement Jack and Doris lived on Big Cedar Lake and eventually in West Bend.

Jack is preceded in death by his wife Doris, his son Stanley who died in Vietnam in May 1970, his parents Jacob and Margaret; and his siblings.

A Funeral Service for Jack will be at 11:00 am on Tuesday, March 28, at Phillip Funeral Home Chapel of West Bend. The family will greet friends and relatives on Tuesday, March 28 at the funeral home from 10:00 am until time of service (11:00am).
The family would like to extend a special “Thank you” to the staff of Seasons Hospice and Lighthouse of West Bend.  Thank you for always being there.