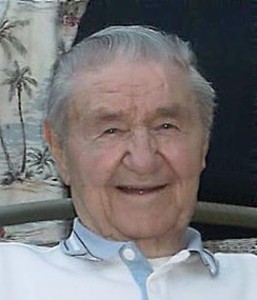 He was born in Harford, Wisconsin, Sept. 20, 1924 to Joseph and Alice Tennies on the family farm.

Jerome only completed the 8th grade because he was needed to help on the family farm. He also worked at various farms to help out the family. After hearing of the bombing of Pearl Harbor he joined the Army and headed for Europe. His impressive anti-aircraft skills earned him an assignment with the Air Force to guard the base from incoming aerial threats. Changes in the war found him landing on Omaha Beach a month after D-Day and was transferred to the Army. Jerry participated in the Battle of the Bulge and was in Germany when the war ended.

He married the love of his life, Vivian Brown, on Nov. 19, 1949, who had a son. In 1962 he packed up the family and moved west to Southern California. He worked as a carpenter, and owned a bakery and a mobile brake service. In April 1976 they bought the Rough and Ready Country Store in Rough and Ready, CA, and moved north. They sold it in 1984 and retired to their family-built home near Bitney Springs Road in Nevada City, CA.

He was preceded in death by his wife Vivian; his step-son Richard Baumdicker; and grandsons Timothy Baumdicker and Andrew Tennies.

He will be remembered by his strength and courage, as well as the love for his country and his family.