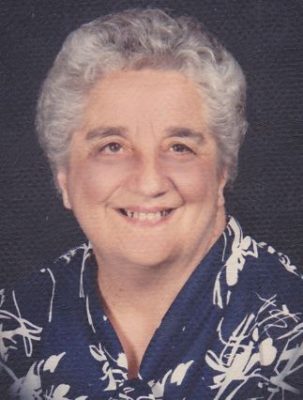 She was born on April 16, 1926 to the late Edward and Leona (nee Kelling) Oelhafen in West Bend WI. She graduated from West Bend high school in 1943. On August 30, 1947 she was united in marriage to Elmer Kufahl at St. John’s Church in West Bend.

Mable worked over 30 years for the West Bend Company and was a member of the 25-year club. She was a member of Fred A. Schaefer VFW ladies Auxiliary, the ladies aid at St. John’s and the Homemakers organization.

In addition to her parents, she is preceded in death by her two husbands; a brother, Robert Oelhafen; a sister, Bernice (Jim) Grigg; her grandson, Jeffrey Moser; a brother-in-law, Donald Kielley; two sisters-in-law, Erna York and Ruth Korneli.

The family will greet relatives and friends at the church Tuesday from 10 a.m. until the time of service.

The Myrhum Patten Miller & Kietzer Funeral Homes have been entrusted with Mable’s arrangements.