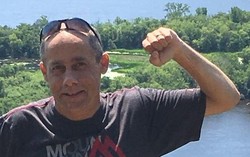 Mark was born July 6, 1967 in West Bend, Wisconsin to John and Ruthann Gehl; Ruth preceded him to eternal rest in 2011.

Mark is survived by his devoted and amazingly strong wife, Amy, and son, Will, age 8; father, John, and his wife Mary; sister, Kirstin, her husband Bud, son Ian and daughter Alyssa; brother, Matt, his wife Julie and daughters, Paige and Olivia; brother, Josh, his wife Tina and son Justin; loving in-laws Dave and Connie Mickelsen; brother-in-law, Dan Mickelsen and son, Sam. Mark is further survived by cousins and other family, as well as lifelong friends, Larry and Deb Wheaton and Dave Stadelmann.

Mark lived a good life surrounded by family and many friends. Mark was an avid outdoor sportsman enjoying such things as fishing, boating and snowmobiling. Mark was active in his local gun club and enjoyed competitive shooting and hunting. Mark was also truly passionate about bicycling.

He delighted in teaching his son Will to bike and rode extensively with Will and Amy on local trails and roads. As a nearly life-long Type 1 diabetic, working toward a cure for diabetes was very important to Mark. He contributed to this effort by riding in several of the Juvenile Diabetes Research Foundation’s Annual Death Valley Century fundraiser.

In 2009 Mark received a life changing gift of a kidney/pancreas transplant. This gift allowed him to participate in his life again with freedom. The family would also like to recognize the donor and their family.

A lot of words can be used to describe who he was: father, brother, son, friend, strong and brave. He lived a life often beset by challenges. He continued to face his challenges with resilience and determination, striving to be the best father he could be for his son, the best husband for his wife, the best brother for his siblings, and the best son he could be for his father. He fought bravely, with resolve, and without complaint until his last breath. He will be missed by many.

“If you can force your heart and nerve and sinew

To serve your turn long after they are gone,

And so hold on when there is nothing in you

Except the Will which says to them: ‘Hold on!’

Yours is the Earth and everything that’s in it”

Visitation will take place at the Becker Ritter Elmbrook Funeral Home in Brookfield, WI on Tuesday, April 4, 2017 from 3PM until time of service at 5PM.

In lieu of flowers, donations can be made to JDRF or American Transplant Foundation.