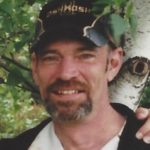 Michael J. “Andy” Andrew, 51, of Eden went to his heavenly home on Friday, Sept. 23, 2016 at his home with his beloved family gathered around him.  He was born on Dec. 9, 1964 in Green Bay, the son of Ronald and Marlene (Schmitz) Andrew.  He was a graduate of New Holstein High and did his mechanical training with Job Core in Indiana. He volunteered with the New Holstein High School Conservation Club cleaning trails streams and rivers.

Mike married Julie Ann Paulin on May 7, 1988 at St. Ann Catholic Church in St. Ann. He worked at Vogel Chevrolet-Oldsmobile in Kiel where he got his nickname “Andy” and then in 2005 he started working at Oshkosh Corporation where he enjoyed working with friends and co-workers. In their younger years, Mike and Julie were members of a bowling league and a truck mudding club. Mike was a member of Shepherd of the Hills Catholic Parish and enjoyed hunting, fishing, camping, watching movies and fireworks with family in his free time, working on cars especially his 1966 Chevy Caprice with his son Tyler, loved chocolate but most of all Mike valued the time spent with family and friends.

Those left behind to cherish his memory include his wife Julie, his children Megan Andrew (Brennan Nieskes) and Tyler Andrew (Sierra Reiman), his grandson Adrian Andrew his “Little Buddy” who he adored, his father Ron, his sister Tammy Timm, his nephew and nieces Nik Newell and Natasha and Natalee Timm, special friends Christine Craig and Dave Sattler, other relatives and friends. Preceding him in death was his mother Marlene and his grandparents.

Funeral services with be held Friday, Sept. 30th at 5:30 PM at the Twohig Funeral Home, 305 Fond du Lac Ave. Fond du Lac.  Deacon Pat Kinear will officiate and inurnment will be in St. John’s Cemetery at a later date.

Visitation will be Friday, Sept. 30th from 1:00 PM until time of services at the funeral home.