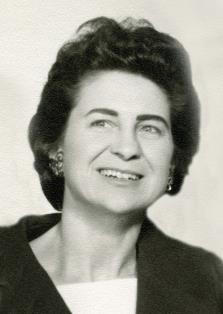 Mildred was born January 31, 1926, on a farm outside Jesup, the daughter of the late Albert and Elizabeth (Trierweiler) Strauel.  She attended Jesup High School where she was in all the theatrical productions.  She played Mrs. Miniver.

She worked for the Department of the Navy in Washington, D.C., in 1944 and 1945.  In 1948, she graduated from Iowa State with a degree in home economics which she taught at high schools in Oelwein, Charles City and Kewaskum, and at MATC.

On a blind date she met her beloved husband of 62 years William Hayes.

She waited for him while he served his commitment during the Korean War and married him in her home town church, St. Athanasius in Jesup on July 31, 1954.

Within a couple of years they were living in Wauwatosa where they raised four children. They were faithful members of St. Jude Parish and after moving to West Bend in 1991, of St. Frances Cabrini Parish.

Mildred was a member of the West Bend Women’s Club and AAUW.

Mildred remained true to the values learned as a youth on her family farm which in many ways she never left.  She was a teacher, long after she stopped teaching home economics.  She taught the values of love, simplicity, humility, honesty, thriftiness, and good old fashioned hard work which she prescribed as the cure for most ailments.  She never thought anything she did was special but she did all the little things that profoundly touched the lives of so many.

Those Mildred leaves behind to cherish her memory include her husband, William Hayes; four children, Michael (Elizabeth) Hayes of Whitefish Bay, Timothy Hayes of Whitefish Bay, John Hayes of Lexington, Kentucky, and Sara Hayes of Whitefish Bay; eight grandchildren, Erica, Isabelle, Lillian, Greta, Peter, Josef, Matthew, and Jacob; a cherished older sister Florence Jaeger (FaceTiming with her until the end) formerly of Madison, now in Sante Fe, New Mexico; two sisters-in-law Ruth Strauel, wife of her deceased brother Daniel Strauel, of Jesup, Iowa and Rosemary Hayes Mahoney of New Berlin; a brother-in-law, James Hayes of Clearwater, Florida; nieces, nephews, other family and friends. She spoke often of her fond memory of her younger brother Billy who died at the age of 17 in a car accident.

A Mass of Christian Burial for Mildred will be Monday, April 24, 2017, at 7 p.m. at St. Frances Cabrini, 1025 South Seventh Avenue, West Bend.  Father Nathan Reesman is officiating.  Visitation is 5-7 p.m. at the church.  Private interment at Old St. Killian’s Cemetery in Hartford, WI.

In lieu of flowers, memorials to St. Frances Cabrini School Endowment Fund or charity of your choice is appreciated.

Mildred’s family would like to extend their appreciation to Laurie, Nikki, Kim, Sara, Katie, and all the staff at Cedar Community Hospice for their fine care. Special thanks to St. Joseph’s Hospital, Dr. Mosley and nurse Jane. We would also like to thank the numerous family, friends and neighbors for the outpouring of love and kindness.

The Myrhum Patten Miller and Kietzer Funeral Homes have been entrusted with Mildred’s arrangements.