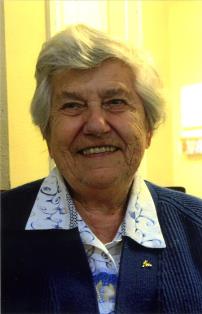 Naome will fondly be remembered for the love she had for her family and her church.  She was a lifetime member of Faith UCC in Slinger.  Naome enjoyed cooking, traveling, shopping, gardening, and being very social with all those she knew.

In addition to her parents and husbands, Naome was preceded in death by two brothers-in-law, Norman Schall and Richard Tuchscherer, many relatives and friends.

A funeral service for Naome will be held at 11:00 a.m. on Saturday, April 22, 2017, at Faith UCC, 2895 Slinger Rd. in Slinger.  Rev. Sharon Stier will officiate and burial will follow in the church cemetery.

The Pickhard family will greet relatives and friends at the church on Saturday from 9:00 a.m. until the time of service.

The family would like to extend their heartfelt appreciation to Brook Gardens, Heartland Hospice, and all those who supported Naome during her long life.

The Myrhum Patten Miller & Kietzer Funeral Homes have been entrusted with Naome’s arrangements.  Additional information and online guestbook may be found at www.myrhum-patten.com.