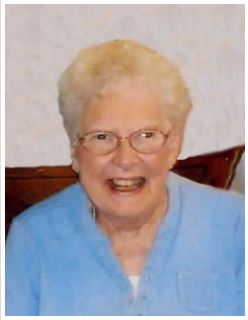 Rosemary was born on July 31, 1925, in Milwaukee, the daughter of the late George and Viola (nee Groeschel) Weber and on August 10, 1946, she was united in marriage to Louis Rutz in Milwaukee.  Louis preceded her in death on March 28, 2001.

Rosemary was a graduate of Rufus King High School and worked at JC Penney for 20 years.   She was a member of Immanuel United Church of Christ in West Bend.  Rosemary was a talented artist, seamstress, and enjoyed making ceramics.  She was an up-beat person who enjoyed being around the company of others, especially her family.

In addition to her husband and parents, Rosemary was preceded in death by two sisters, Gloria Gebhardt and Katherine Altschwager.

A funeral service for Rosemary will be held at Noon on Friday February 9, 2018, at the Myrhum Patten Miller & Kietzer Funeral Home, 1315 W. Washington St. in West Bend with Rev. Rich Vincent officiating.

In lieu of flowers, memorials to Immanuel United Church of Christ in West Bend are appreciated.

The Rutz family will greet relatives and friends at the funeral home on Friday from 11:00 a.m. until the time of service.

The Rutz family would like to extend their heartfelt appreciation to the staff at Cedar Lake Health and Rehab for the wonderful care provided to their mother as well as Rev. Rich Vincent for his many visits.