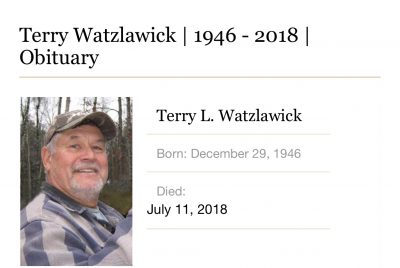 July 13, 2018 – West Bend, WI – Terry Lee Watzlawick, 71, of Shawano, formerly of West Bend, passed away unexpectedly on July 11, 2018 at his cabin in Presque Isle.
Terry was born on December 29, 1946, son of the late Paul and Audrey (Wilkens) Watzlawick.
He served his country in the United States Air Force from 1965 until his honorable discharge in 1969 and was very proud to have his grandson, Hunter, currently serving in the United States Army.
On August 3, 1968, Terry was united in marriage to Gloriann Quaas in West Bend.
Together the couple raised two children and enjoyed a wonderful life together.
Terry worked for the West Bend Company for many years until his retirement.  He was a fan of the Packers, Brewers and Badgers.  Terry enjoyed trips to both Canada and Florida.
He was an avid outdoorsman, he loved hunting and fishing and was a lifetime member of the Armstrong Creek Hunting Club and the NRA.
He was a faithful member of St. Jakobi Lutheran Church.  Terry loved his family and was thrilled he had the opportunity to teach his grandchildren to fish and hunt.  Terry was a wonderful husband, father, and grandfather and will be deeply missed by those who love him.
Terry is survived by: his loving wife of nearly 50 years, Gloriann; his son Jay (Roxanne) Watzlawick; his daughter, Amy (Scott) Fideler; his grandchildren, Chyanne, Hunter and Tyler Watzlawick and Owen, Ethan and Ava Fideler; two great-granddaughters, Nova and Lyla; his brothers, Steve (Karen) Watzlawick of Irma and Jeff (Debbie) Watzlawick of West Bend. He is further survived by brothers-in-law, sisters-in-law, numerous nieces, nephews, other relatives and friends.
He was preceded in death by his parents, Paul and Audrey and his faithful companion, Toby.
Funeral services for Terry will be held at 12:00 pm on Wednesday, July 18, 2018 at St. Jakobi Lutheran Church in Shawano with Pastor John Eyer officiating. Burial will be in the church cemetery.  Military honors will be conducted by the Shawano American Legion Post #117.  Visitation will be held at the church on Wednesday from 10:30 am until the time of the services.