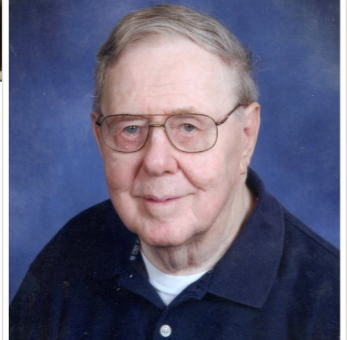 He was born on March 4, 1929 to the late Erwin and Lila (nee Kibbel) Schmidt in the Town of Auburn. He graduated from West Bend High School and went on to college at Lakeland College and then to Marquette University. On August 23, 1952 he was united in marriage to Pauline Ewert in Fort Riley, Kansas. He honorably served in the United States Army. Delbert worked as an accountant at the West Bend Company, Bend Industries, and DGS Trucking. He enjoyed playing sheepshead with his card club for 50 plus years. Delbert was a member of the West Bend Lions Club and West Bend Investment Club. He will be missed by all who knew him.

In addition to his parents, he is preceded in death by his wife, Pauline Schmidt; 2 sisters, Dolores (Lloyd) Melius and Juneva Schmidt; and a nephew, Ronald Melius.

The family will greet relatives and friends at the funeral home on Tuesday from 11:00 a.m. until the time of service.

The family would like to give a special Thank You to the wonderful caregivers at Serenity Villa, Slinger and Right at Home of West Bend.