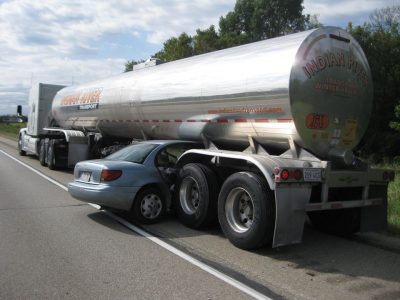 The driver of the car, a 27-year-old Omro man, was southbound on I41 in the left lane and collided with a semi-tractor tanker traveling in the right lane.

During the course of the incident the car became lodged underneath the tanker trailer at highway speeds. The passenger in the car, a 30-year-old Oshkosh man, was the only one hurt; he suffered minor injuries from flying glass.

During the investigation the deputy located several items of paraphernalia including a pipe, “snort straw,” scale and a corner-cut baggie with drug residue in it.

The driver passed field sobriety testing, but was arrested for possession of drug paraphernalia.