Dec. 8, 2016 – Slinger, WI – With temperatures in the teens and wind chills in the single digits, it sounds like a day for soup simmering on the stove while sipping hot chocolate.
But outdoor workers are toughing it out on a number of projects in Slinger.
At Little Switzerland the snow-making crew has more than made up for the few days of warm weather. With the snow cannons running full boar it appears all the front-hill runs should be open this weekend.

Around the corner and up the street the Huntzinger crew is hard at work on the new dialysis clinic for Frensenius Medical Care. The 6,413-square-foot facility is just north of Burger King. The clinic is slated to open in early 2017. 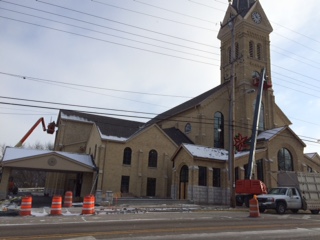 Outside St. Peter Catholic Church in Slinger construction crews were working atop several cranes.  Several of the  windows had some glass in place as of Thursday morning. The church was supposed to be completed for Christmas Mass, however material shipments were not available on a timely basis and so the opening of the church has been pushed to 2017.

Christmas Masses will be in the St. Peter School gym and St. Lawrence Church for both Christmas Eve and Christmas Day.