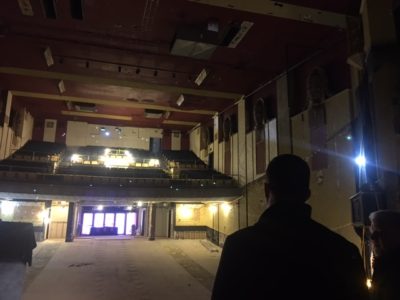 Dec. 22, 2016 – West Bend, WI – Since the news broke Monday on WashingtonCountyInsider.com that a plan was put forth to raze the downtown West Bend Theatre, neighbors on social media have been up in arms.

Word of a wrecking ball taking down the eastern portion of the building has hit many West Benders right in the feelings.

There have been rumors of a renovations plan, but that’s been in the works for more than a year. There have been staged events and petitions with limited turnout. People have voiced their opposition on Facebook but a dusty, dilapidated piece of history still remains idle on S. Main Street.

On Tuesday a private tour was held with a potential investor. “I’m very interested in this project,” said Tim Schmidt, CEO of Delta Defense in West Bend.

Schmidt is in the process of building a new headquarters in West Bend. His company provides sales, marketing and IT administrative services to the United States Concealed Carry Association and publishes Concealed Carry Magazine. In 2016 Delta Defense was No. 1971 in Inc. 5000 rankings. 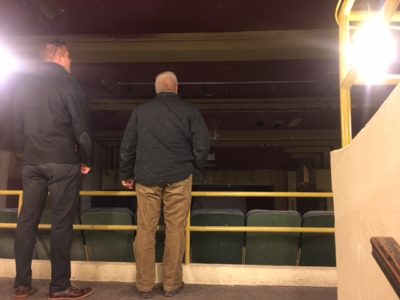 “I’m very optimistic,” Schmidt said about the proposal to renovate the theatre.

“There’s too much history to destroy. Plus the structure is in such good shape.”

Schmidt was given a tour by Kevin Zimmer, a West Bend-area businessman who is a strong supporter of preserving local history.

“My wife Amy and I think it’s great the community is starting to learn of evolving plans for the theater,” Zimmer said.  “In the past year or two the topic of reviving the theatre has become hot and gone cold; but now with deadlines looming with the fate of the bridge, a sense of urgency is upon us.”

Zimmer reached out to Schmidt in hopes of sparking his interest to help preserve one of the historic gems of West Bend. 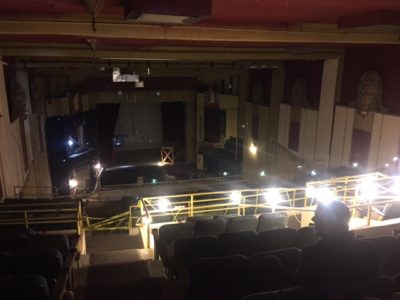 “We have been trying our hardest to raise awareness of this historical structure’s need to be saved,” said Zimmer. “It’s obvious there’s interest in saving both the pedestrian bridge and renovating the theater as a multipurpose, year-round facility.”

Zimmer has watched the frenzy surrounding the future of the theatre play out on social media.

The biggest obstacle to get a renovation to come to fruition is funding.

“What the project really lacks is a financial leader that can challenge our community to all get on one page, to pool both our emotional and fiscal energies to do something great,” he said.

“I strongly believe the building is viable to be saved and can be done so within a reasonable budget, possibly even with the same, realistic amount it would take to transform it into an outdoor amphitheater.”

Zimmer had a study done on the structure of the building.  A hard-core business plan has yet to be provided but Zimmer believes the structure can be saved between $750,000 and $2 million.

The operation plan moving forward, has yet to be determined.