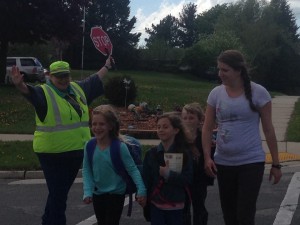 Jan. 23, 2018 – West Bend, WI – It was a short meeting Monday for the West Bend Common Council as a lack of a quorum forced the meeting to be postponed.

One agenda item that was taken care of included a proclamation by Mayor Kraig Sadownikow marking this Crossing Guard Awareness Week in West Bend.

Each year the  West Bend Optimist Club recognizes a local crossing guard for their service.

Bonnie Weston was named Crossing Guard of the Year in 2016.

Weston, now retired, had been a crossing guard in the community for 37 years. She got her start in 1981 when her mother, Delores Rosbeck, fell ill and could not work as a crossing guard at her corner on Kilbourn and Indiana Avenue.

Weston stepped in and she had been safely getting kids across the street ever since.

At the time she received the award, Weston said,“I’ve been on the corner of Jefferson Street and Green Tree Road for 34 years.”

“I don’t have any kids of my own and it’s just being outside and it’s fun watching them grow up. Right now I have kids of kids I crossed,” she said.

Weston worked the corner at Green Tree and Jefferson Street where she saw some excitement over the years, including a horse that escape a nearby farm.

“It ran up the road right behind me,” Weston said. “Made it all the way to Highway 45 before anybody caught it.”

Weston also witnessed a child fly out of a car that turned the corner on Green Tree. “The mom stopped the vehicle, the child wasn’t hurt, he got back in and they took off,” she said.

Dressed in a fluorescent lime green hat and vest, Weston was always armed with a whistle and hand-held stop sign. She was vigilant and arrived at her corner early.

“These kids are like part of my family,” she said. “Untied shoelaces are my big pet peeve. I help them because I don’t want them tripping in the road.”

Sergeant Tracey Hetebrueg was the one who nominated Weston for School Crossing Guard of the Year in 2016.