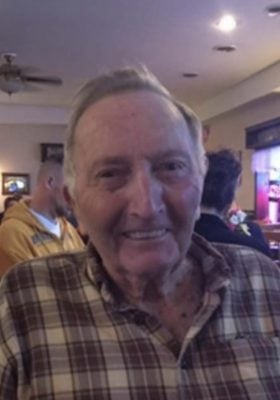 Bob spent his early years in Port Washington, WI and attended elementary and high school there. While in high school, he worked at several jobs learning different trades. After graduating from Port Washington High School, Bob enlisted in the US Navy, and was honorably discharged after four years of service. He returned to Port Washington and was employed by J&H Heating, learning the heating and sheet metal trade.

In 1958 Bob started his own business, Kearns Heating Co., serving West Bend and surrounding areas. Bob built several duplexes and constructed the main terminal at the Hartford Airport.
Bob purchased a condo on Sanibel Island FL, where he frequently spent his vacation time and which he also made available for his children’s use as well. After retiring at age 65, Bob passed the family business to his eldest son, Robert Jr. Bob then, developed and ran “Country Sports Golf Practice Center” in Slinger, WI assisted by his son Brian. Besides being busy at the “center ” Bob took pride in being able to financially help out his children whenever they needed some assistance.

Bob was content and felt he had lived a full life.

Funeral Services for Bob will be held at 1:00 pm on Tuesday, June 29 at the Phillip Funeral Home Chapel 1420 W Paradise Dr West Bend, WI 53095) with Pastor John Bass presiding. Visitation will be at the funeral home on Tuesday from 11:00 am until 12:45 pm. Internment immediately following at the Washington County Memorial Cemetery where he will be laid to rest next to his two children, Richard James and Diana Marie.

Rest in peace, Bob. You are loved and greatly missed.