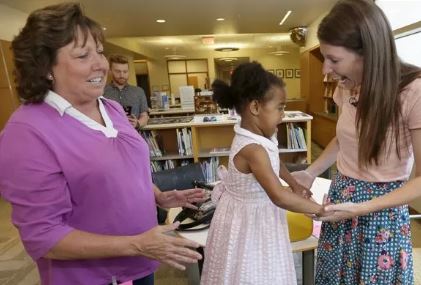 July 22, 2017 – Slinger, WI – Jim and Bev Melius of Slinger are mentioned in an article in today’s Milwaukee Journal Sentinel regarding a little girl they’ve adopted who received a successful kidney donation.

A portion of the article by Jim Stengl is below.

Bev and Jim Melius came along and welcomed the girl into their home in July 2014.

They live on a farm in Slinger that’s been in the family for a century. And over the past 16 years, they have been foster parents to more than 60 children. They adopted four boys out of foster care, now all teenagers, a 4-year-old girl, and last year Elizabeth.

They made sure Elizabeth received the dialysis she needed, which was every night for 10 hours. They carefully monitored her diet, tracked her medications and made regular trips to the hospital.

“She had a rough start in life,” Bev told me, “but she likes to do what other kids like to do. She likes to play outside. She likes to jump on the trampoline. Right now they’re climbing up and down the slide. They like to play in their motorized Barbie cars and ride bikes.”

In May, the Melius family learned that an anonymous donor was verified as a medical match for Elizabeth. Surgery was scheduled for a month later. Bev worried the donor might back out.

Read the rest of the article by clicking HERE.