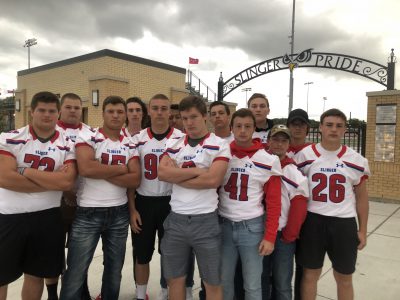 Oct. 5, 2018 – Slinger, WI – The Slinger Owls fans and football players started Homecoming weekend with a bang.  Following a damp parade and other activities the spirits of the Slinger High School students, alumni and fans were bright and shining.

With just six minutes remaining in the first quarter, Slinger’s quarterback Danny Breuer completed a 31-yard pass to Hayden Wagner, the Point After Touchdown by Trevor Ulesich was good and at the end of the first quarter Slinger was up 7 to 0 over Grafton Blackhawks (4-3 on the season).

The only score in the second quarter came on a 38-yard field goal made by Trevor Ulesich.

In the third quarter Slinger’s star running back Jeraed Lighthizer made a 4-yard touchdown run.  On a questionable PAT block of Trevor Ulesich’s attempt the score was Slinger 16 – 0.

Grafton kept fighting back all night finally with 9 minutes left in the game Caden Knauer completed a 4-yard run for a touchdown, however the 2-point conversion was denied by Slinger’s defense.

With just over two and half minutes in the game Breuer and Lighthizer teamed up for an 8-yard run and the PAT by Ulesich was good.  Final score Slinger over Grafton 23 – 6.

Slinger improves to 7-1 and will face off in the final Northshore regular season game at Homestead High School (8 – 0) in Mequon next Friday evening.

During the half-time Larry Buch, Tim German and Austin Kearns were inducted into Slinger’s Hall of Fame.