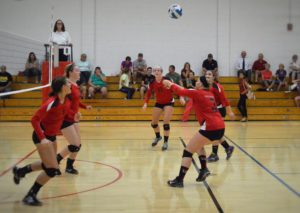 “We played the match without our setter Atira Boyce who was out with a concussion from Wednesday’s night match,” said coach Deb Butschlick.

Michaela Millard took over as setter and led the Wildcats.

“She did an outstanding job recording 32 assists for kills, 9 digs and 2 ace serves,” Butschlick said.  “I was very impressed how Michaela really stepped up to the plate and led the team.”

Amber Herbst led UW-WC with 16 kills, 10 ace serves and 4 digs.  Courtney Peters had 8 kills and 12 digs.  Marisa Moser led the team with 19 digs.
The team worked hard on defense and making the most out of every set, said Butschlick.