Home  »  Uncategorized   »   Thanks for the lift, Gordie Boucher 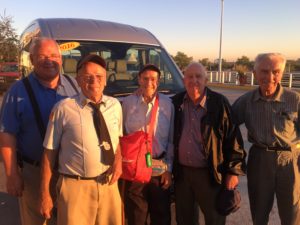 Four Korean War veterans from Washington County are embarking on a week-long tour to South Korea.  The group is being hosted by the Ministry of Patriots and Veterans Affairs.

The Revisit Korea Program expresses Korea’s appreciation and respect for Korean War veterans who sacrificed themselves to defend Korea’s democracy and peace.

The goal of the program is to show the miraculous growth of Korea’s economy, which has been made possible thanks to the sacrifice and contribution of Korean War veterans.

A big, big thanks to Gordie Boucher for providing the sweet vehicle to O’Hare and thanks to volunteer Ron Naab for driving. We made it through rush hour in record time. Must have been the red light we cruised through after just leaving the VFW. (But you didn’t hear that from me.)