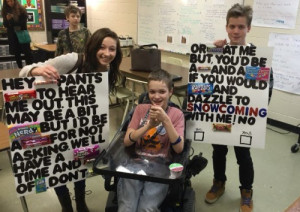 West Bend High School reporter Allison Trampe wrote a fantastic story about two students, who describe themselves as ‘besties’ and how their friendship grew to attending the recent Snowcoming Dance.  Read a portion of Trampe’s story below as it appeared in The Current.

Austin Jug never expected to be at the center of a high school dance. Austin, you see, is in a wheelchair.

“I recently got asked out to my first high school dance ever,” Austin said.

Austin, a West ninth grader, has cerebral palsy, which is a disorder of movement, muscle tone, or posture. He also has OMA, a visual disorder. He was surprised when Lexi Isaac, an East junior, asked Austin to the WBHS Snowcoming Dance on Feb. 27, especially because she did so in a big way.

During Austin’s fourth hour class, Lexi came in with two big posters that combined letters and candy bars to spell out, “Hey Smartie pants… Take 5 to hear me out. This may be a bit Nerdy, but I’d be an airhead for not asking. We’ll have a Good & Plenty time and Mounds of Fun.  Don’t Chuckle or Snickers at me, but you’d be a Lifesaver and a Sweetart if you would Razzle and dazzle to Snowcoming with me! No Twix, just say yes, or yes!”

Read the rest of the story at The Current