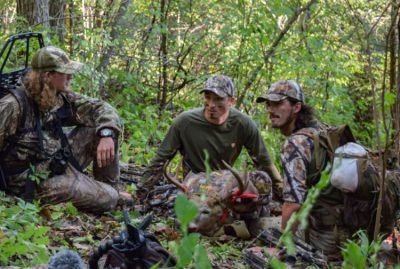 Oct. 11, 2018 – Slinger, WI – The early part of October often times gets a bad rap when it comes to whitetail hunting. You’ve heard it time and time again, right? The dreaded October lull.

But, what if the October lull is simply a misnomer and doesn’t actually exist?

So often I see people simply use the “lull” as an excuse to not even hunt. Don’t let people tell you that you can’t take down mature bucks this time of year because that’s just simply not true.

The thing about mature bucks this time of year is they don’t move very much, and you may have to get a bit creative when pursuing them.

Here are three keys I think can make a difference as you go after mature bucks during this time of the year.

So often, through talking to others and watching how people hunt, I see a lot of hunters that go to the same stand hunt after hunt and are surprised when results aren’t changing, especially if they hadn’t been successful from that particular stand in years prior. I can understand you not wanting to go in and get aggressive on a property right now that you consider one of your best properties late in the month or in early November, but this is a great time to check out new public pieces or other spots that you might not otherwise hunt. Don’t be afraid to get aggressive, maybe employ some ….

Click HERE to read the rest of “Three keys to harvesting an early October buck” by Alex Comstock.