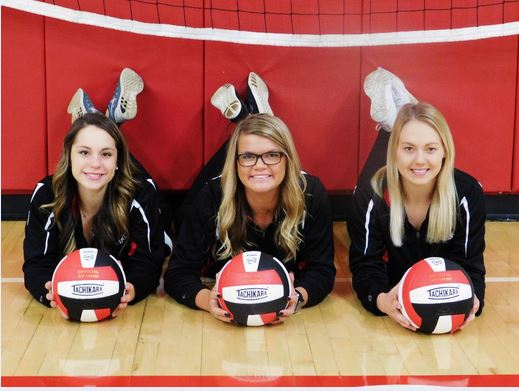 Kayla Schommer, as a freshman was selected to the First Team All – Conference and voted as the Setter of the  Year.  “Kayla had to made a huge adjustment playing at the college level,” said Butschlick. “She really worked on your setting accuracy and especially her quickness getting to the ball.  Kayla’s conference stats were; 325 assists for kills, she led the team with 46 service aces with 85 percent serving accuracy, 78 digs, 9 kills, and 8 blocks.”

Courtney Peters is a returning sophomore who last year was selected to the second team All-Conference, but her hard work paid off as she was ranked 5th in the conference earning her a First Team All-Conference selection.

Meghan MacFarlane, as a freshman was ranked second in the conference and selected to the First Team All-Conference.  “Meghan’s hitting ability out of the middle position kept the opponent guessing,” said Butschlick. “She really stepped up her game from the beginning of the season and her desire to help led the team can be seen in the way Meghan played.”

“I could not have been prouder of these three players,” Butschlick said.  “Their hard work and team dedication has put them with the elite players of the conference.”