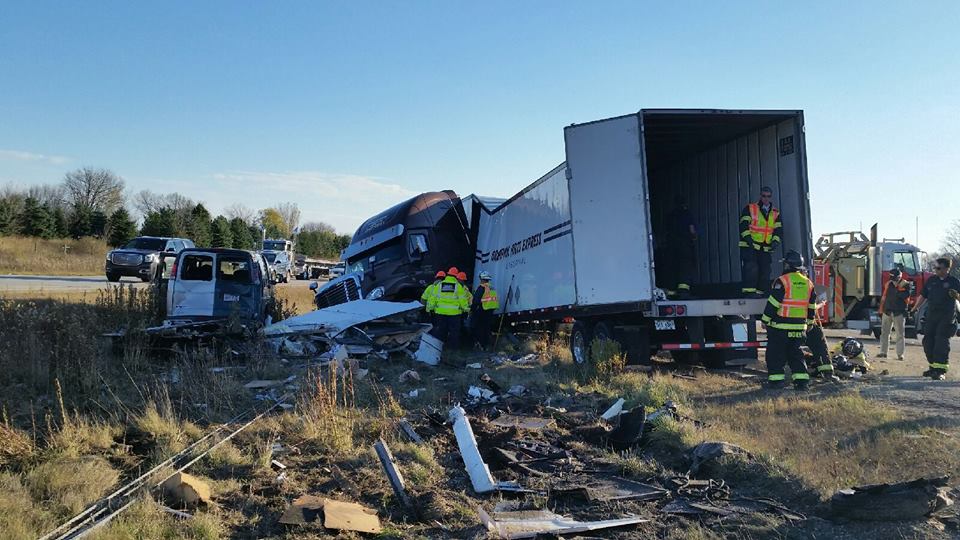 Nov. 7, 2017 – Ozaukee Co., WI – On Tuesday, Nov. 7, 2017 at approximately 1:17 p.m. the Ozaukee County Sheriff’s Office responded to a multi-vehicle traffic accident on I43 southbound north of Lakefield Road in the Town of Grafton.

The investigation determined a van pulling a camper was traveling I43 southbound slowing for traffic ahead when it was struck from behind by a semi-tractor/trailer. The impact caused the semi-tractor to jackknife into the median.

Three occupants were transported to Aurora Hospital in Grafton for non-life threatening injuries.

All lanes of I43 southbound were closed at STH 60 due to lane blockage from large amounts of debris from the camper.

The Ozaukee County Highway Department is assisting with off-loading approximately 70,000 pounds of paper products from the semi-tractor trailer.

The Ozaukee County HazMat Team is also addressing a diesel fuel spill from the semi-tractor.

It is expected that all I43 southbound lanes will be closed for approximately 2-4 hours while emergency personnel address the scene of the traffic accident.

The lane closures are causing numerous traffic delays on I43 northbound and southbound in the Grafton and surrounding areas. Please choose and alternate route of travel until the I43 southbound lanes are re-opened.