Home  »  Uncategorized   »   Tips to succeed at the Marmite challenge 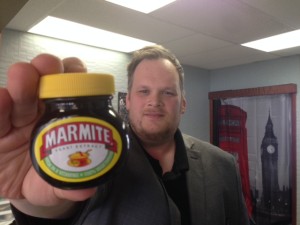 Stop on in this Saturday, March 5 for the grand opening of Mind the Gap Store, 121 S. Main Street in West Bend.

Double dog dare you on the Marmite challenge!

Here are a couple tips from Wiki How to do Anything –   suffer through the Marmite challenge.

Spread Marmite very sparingly. In Britain and other places where Marmite is popular, it’s often eaten as a spread on toast, crackers, and other baked bread products. Since Marmite has such a strong salty, yeasty taste, it’s usually eaten in small quantities even by its fans. If you’re using your Marmite as a spread, rather than using a full spoonful of it like you might for jam or peanut butter, instead, use a tiny pea-sized amount (like you would for toothpaste).

Ideally, when you spread this tiny amount of Marmite on your bread, it should leave a paper-thin layer of Marmite — just enough to discolor the bread. You don’t want any noticeable “thickness” to the Marmite, as this will give a seriously overpowering taste.

Mix Marmite with butter (or another spread) to dilute the taste. One of the most common ingredients to combine with Marmite is butter, especially when the Marmite is being used as a spread. Butter’s rich, smooth taste pairs well with the strong, salty flavor of Marmite. If you hate Marmite, try applying a generous helping of butter to your bread before or after you spread on the Marmite — the more you use, the less you’ll taste the Marmite.[2] To many, this makes Marmite much more palatable.
Image titled Eat Marmite Step 3

Take small bites. Getting used to eating Marmite is like the old saying about how to boil a frog — if you drop a frog into a pot of hot water, it will jump out, but if you drop it into a pot of lukewarm water and slowly increase the heat, it won’t know anything’s wrong until it’s too late![3] Rather than trying to wolf down your Marmite in a few huge bites, instead, take small nibbles to begin. Gradually, as you make progress, the strong, salty taste should become more bearable.

If you’re having a hard time swallowing even small bites of your Marmite spread, try moving each bite carefully to the back of your mouth so that you can swallow it without much chewing. This should minimize the amount you have to taste the Marmite, but be careful — you’ll need to take small bites to be able to swallow them without choking.

Image titled Eat Marmite Step 4
Take big drinks with each bite. To keep the overpowering taste of Marmite under control, try taking a drink after each bite of Marmite you take. The drink will act as a chaser — the more you sip, the less you’ll taste the Marmite and the quicker the taste will leave your mouth.

Plain, ordinary tap water is a good zero-calorie chaser, but if you really hate the taste of Marmite, you may want to consider a stronger-tasting beverage. After each bite, try drinking a swig of your favorite soft drink, or, if you’re old enough, a stiff cocktail. The strong flavors of these beverages should help “drown out” the Marmite taste.

Try not to smell Marmite before you eat it. The senses of taste and smell closely interact with each other to produce the “effect” that you experience when eating food. The way something smells can affect the way it tastes to you (and vice versa).[4] If you hate the taste of Marmite, there’s a very good chance you won’t care for its smell, either. In this case, try your hardest not to smell the Marmite as you eat it. Usually, the taste, though still strong, will be a little less intense if you make an effort to hold your breath until the Marmite has been swallowed (or nearly so).

Stop in and say hi to owner Rob Tye who hails form Essex.