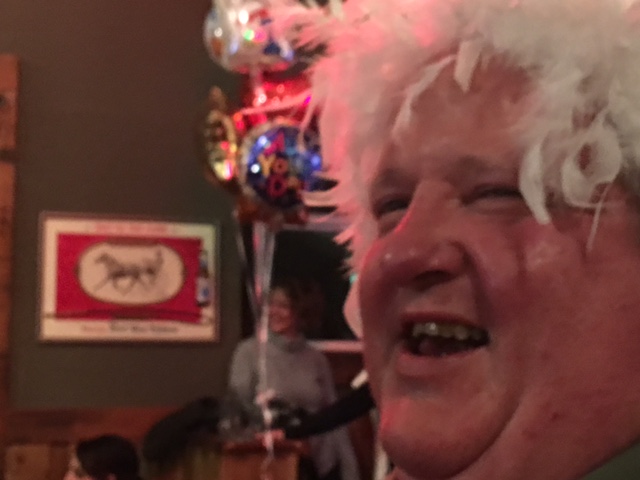 Tommy Schwai was sporting a white boa and signing autographs Friday night as he made his big-screen debut on the new TV series State Plate with former American Idol Taylor Hicks.

“This was awesome,” said Travis Dowden, co-owner of Bibinger’s. “He was a celebrity before this and now he’s an official celebrity.” 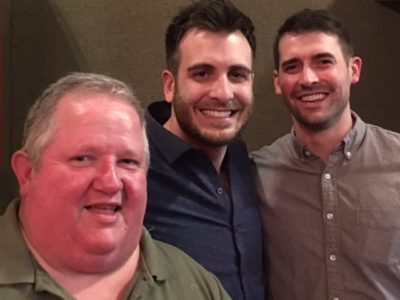 Cars packed the parking lot a Bibinger’s and some vehicles moved to the surrounding streets in Cedar Creek as friends and neighbors gravitated upstairs at the former Schwai’s to watch the making of a new leading man.

Ron McMullen from Germantown said he came out to Bibinger’s special to see the show. “He’s a movie star,” he said. “I got his autograph.

McMullen flipped his fluorescent baseball hat off his head and proudly showed off his the collectible Tommy Schwai signature.

“I’ve known Tommy for 25 years,” said Dee Dee McMullen. “I was here when he and Kathy had their first date; they’re a hard working couple and they deserve this.” 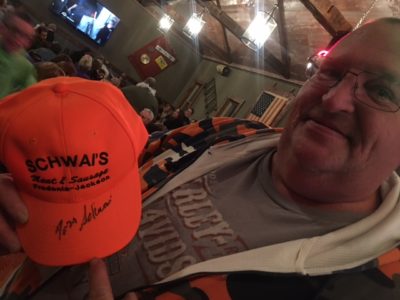 Hicks featured Schwai in the second segment of the show, which was uniquely sponsored by Marie Osmond pitching a weight-loss product.

In typical Tommy Schwai fashion, he worked the crowd – greeting guests and posing for photos with his fans. 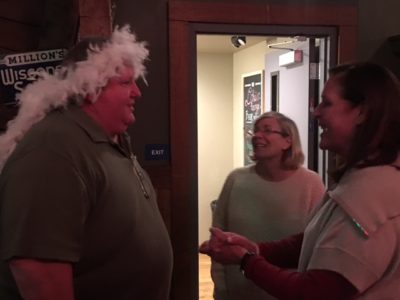 There was a raucous cheer when Tommy came on the screen. Hicks greeted him with a “Mr. Schwais.”

Tommy rolled with it and pretty soon the two were filling sausage casings and Hicks was twisting off hearty links of brats.

After a hard day’s work the pair sat down to enjoy some of brats hot off the grill. 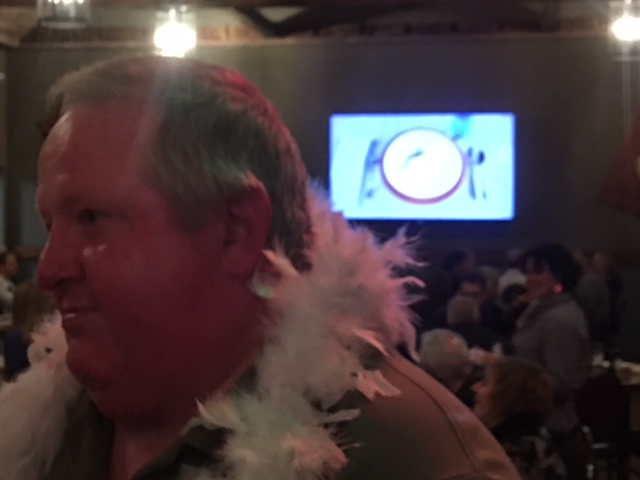 Tommy interrupted the celebration to make an announcement of a new Bibinger’s brat and then plates full of the steaming sausage were passed around for guests to try.

“He was bound to be a star,”  said Nancy Oinas of Menomonee Falls. “Tommy is larger than life; he’s been the star of Cedar Creek for more than 40 years.” 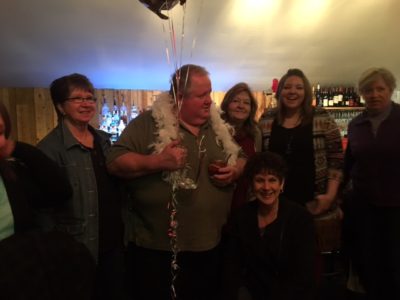 “I hope that people who see it bring us a lot more business,” said Tommy.

The life of a celebrity meant Tommy will get up early Saturday morning so he can help set up for his booth at the West Bend Farmers’ Market and then it’s off to Regner Park as he’s catering lunch for the volunteers at Enchantment in the Park.

Back in June the season 5 winner of  American Idol winner Taylor Hicks visited Schwai’s in Waubeka.

Several behind-the-scenes segments of the taping of the show will be posted shortly at http://www.washingtoncountyinsider.com