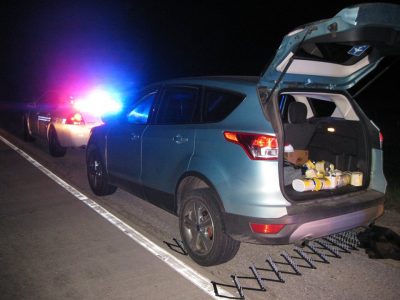 April 26, 2017 – For the second time in less than a week deputies had to address subjects that were lawfully stopped on traffic stops and refused to exit their vehicles.

Tuesday evening at about 8 p.m., a vehicle involved in a retail theft was stopped on US 45 near Pleasant Valley Road. Numerous stolen items were in plain view inside the vehicle. The driver and passenger locked the doors and refused to exit.

Deputies took several precautions to keep the vehicle from fleeing and demanded the subjects exit. After repeated requests for compliance, the deputies forced entry to the passenger side rear window.