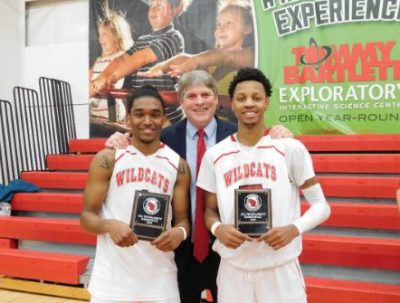 Adrian Huerta and Murphy Braxton Thomas were named to the All-Tournament Team.

Huerta hails from Jones College Prep in Illinois. This was his first season with the Wildcats and he proved to be a team leader on the court.  Whenever a clutch basket was needed, Huerta came through.  In the semi-finals victory over UW-Baraboo, Huerta poured in a game high 23 points with 5 rebounds and 4 steals.  Then the next day he helped seal the championship with 15 points, 12 rebounds and 4 steals against UW-Sheboygan.

J. Braxton Thomas, who played for Bradley – Burbonnais, in Illinois is also a first year basketball player at UW-WC.  Braxton Thomas was one of the top 3-point shooters in Illinois as a high school senior last year.  In the semi-final game against UW-Baraboo he scored 16 points, 2 rebounds, 1 steal and 1 assists for the Wildcats.

Braxton Thomas was also critical in UW-WC’s victory against UW-Sheboygan where he scored 18 points, 7 rebounds, 1 steal and 1 assists.