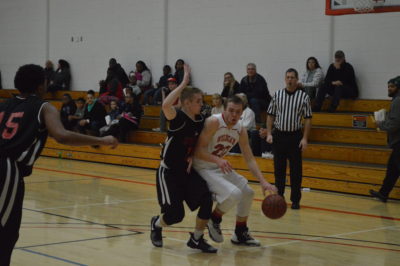 The Wildcats’ high energy multi-changing team defenses held UW-Manitowoc to just 35% shooting for the game while the Wildcats shot 43%.

For UW-Washington County, Dre Johnson collected a double-double with 20 points and 11 rebounds while adding 3 blocked shots.  Aaron Rathke had a season high 21 points with 5 rebounds.

Evan Rathke scored 18 on 64% shooting, and added 4 assists and 4 blocked shots.  Javon Williams led in steals with 5 and dished out 4 assists.  Shaun Fischer grabbed 10 rebounds and had 6 points.

Randy Howard scored 7, with 3 assists and a pair of steals while defensively holding Jemale Brown, the conference’s leading scorer below his season average.

The game in West Bend, which will feature the two remaining undefeated in divisional play teams, poses a major challenge for the Wildcats, since the Cougars have scored over 100 points in 50% of their games and have an average margin of victory of an amazing 33 points per game.