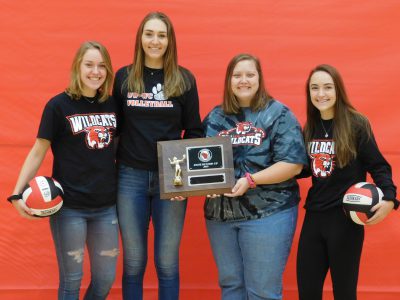 Kayla Boehm was second in the Eastern Division with 79 kills as a middle hitter and hitting at a 30% kill rate. She led the division with 33 block.  Boehm was selected First Team All-Conference and named Player of the Year for a second year in a row.

Caryn Hamm led the Eastern division as a setter, she had 305 assists for kills, 10 ace serves with 91% serving accuracy.  Hamm also had 64 digs and 3 blocks.  She was selected to First Team All-Conference and named Setter of the Year.

Heather Pokowski was our defensive specialist and led the Eastern Division with 308 digs.  She also had 12 ace serves with a 90% serving accuracy,  Pokowski was selected First Team All-Conference and named Defensive Specialist of the Year.

Morgan Kappler was an outside hitter and ranked 3rd on the WCC All-conference Team. She led the Eastern Division with 90 kills with a 20% kill rate, 21 ace serves, serving accuracy at 90% and 181 digs.  Kappler was selected to the First Team All-Conference.

“I am so proud of these players especially for all the hard work they put into the season,” said coach Deb Butschlick.   “The Conference coaches truly saw the skills each one of our players had.  To have one or two players make the WCC All-Conference Team is a blessing, but to have four players on the All-Conference team and three players receiving the highest honors given by the Wisconsin Collegiate Conference is truly amazing.  Even though four players received the honors, it was an entire team effort to have such an outstanding season.”