VIDEO: A love of life is what keeps Clara Moll young. The 106 year old talks dancing, roller skating, and the secret of longevity

She celebrated with family and friends. Pizza, her favorite, was the supper of choice.

We prayed and passed a plate. 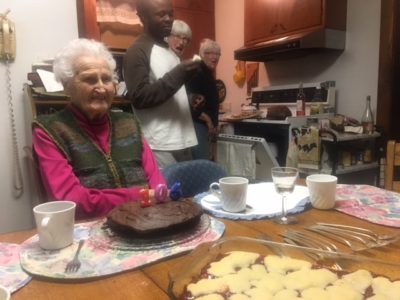 Clara reminisced. She was prompted by her daughter Mary. “Remember in 1976 when you took advantage of the Greyhound Bus offer… 99 days for $99?”

Clara remembered. She traveled the U.S. and saw all her relatives. “Don’t get married,” she advised. “Travel.”

Meantime the group at the party tried to recollect where the Greyhound stops were in West Bend; the consensus was on S. Main Street in front of the Centrum building and outside George Webbs in the West Bend Plaza.

Clara touted “exercise” as the secret to longevity.  She wore out roller skates and proclaimed she would “rather dance than eat.” 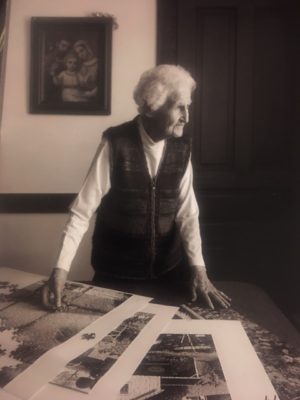 “Wiggle your feet when you’re sitting in a chair,” she said.

At 106 she said she feels fine. “I can read without glasses if it has to be,” she said. “But my hearing is going.”

A single-layer chocolate cake with chocolate frosting is placed on the table.

Three separate candles that count out 1 – 0 – 6 stand mighty on top of the chocolate frosting. “Believe it or not that number 6 was a 5 last year,” said Mary.

A rendition of Happy Birthday …. “and many more” filled the warm kitchen of the old farmhouse on Salisbury Road in Barton.