September 17, 2019 – West Bend, WI – “I’m handing out copies of The Constitution so people can understand how the country was founded and the rights we have,” said Del Ellefson, a veteran from West Bend.

Ellefson was armed with two red bags filled with softcover books containing The Constitution of the United States and The Declaration of Independence.  Ellefson stood on the corner of Decorah and River Road distributing the copies to students walking to school on Tuesday. 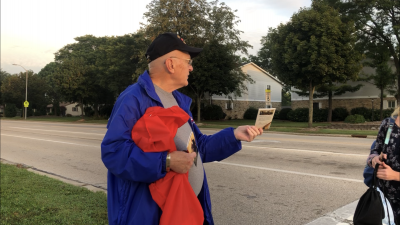 This is U.S. Constitution Day. The day commemorates the Sept. 17, 1787 signing of The Constitution of the United States.

“…each Federal agency or department shall provide educational and training materials concerning the United States Constitution to each employee… on September 17 of each year.” 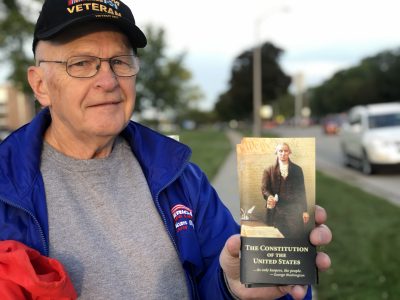 Ellefson said he found importance in The Constitution for several reasons. “Being a military veteran I think it’s pretty nice to be able to have a Constitution, which we fought for, and we’d like to maintain that for the rest of duration for our country,” he said.

Remember School House Rock and the song that helped grade school kids learn The Preamble  to The Constitution?

Many students who received a copy were unaware of U.S. Constitution Day.

Asked what they knew about The Constitution a 15 year old responded “That’s where they signed The Bill of Rights” and another 14 year old said, “It’s from America.”

Ellefson was joined by several other local veterans in his distribution effort.