Home  »  Jackson • Veteran • Washington County   »   VIDEO | Korean War veteran Gerald Wentlandt, 86, of Jackson on June 1 Stars & Stripes Honor Flight | By Samantha Sali
May 30, 2019 – Jackson, WI – Korean War veteran Gerald Wentlandt, 86, of Jackson, is heading to Washington D.C. on the June 1 Stars and Stripes Honor Flight.
Wentlandt was born in 1932 and grew up in Milwaukee. “I graduated from Boys Tech in 1950 and then got a six-year apprenticeship at a printing company,” he said.
Wentlandt had two years of the apprenticeship under his belt before being drafted into the Army to serve in the Korean War. “That was in March 1952,” he said. “I think at that time they had a draft office set up downtown, so my folks took me down in the morning and dropped me off. They gave me a physical, but it wasn’t a real physical, just more of a once over. I can’t remember if we were sworn in that day, but afterward they took us out for lunch at at an Italian place called Mimi’s.” 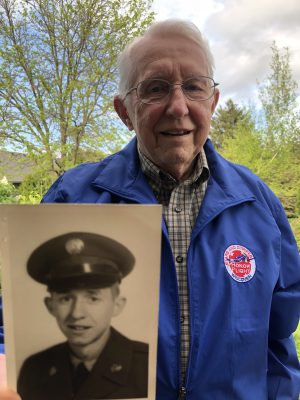 With a few extra hours to spare, Wentlandt and the other new draftees were told they could call their parents to come down and spend time with them before leaving. “I’m an only child, so saying goodbye the first time to my mom was the hardest,” he shared. “My mom was crying and kept looking up at my dad to do something, which of course he couldn’t do anything. I didn’t want to call again and do the goodbyes again.”
Wentlandt was taken to Camp Chaffee, mostly an artillery base,  in Arkansas for Basic Training. “The difference between a Camp and a Fort is that a Camp is temporary and a Fort is permanent,” he explained. “My experience wasn’t too bad because I had just gone to Boys Tech. It was almost like going to high school again, just a little stricter. I thought I adjusted pretty good. They had really old, wooden barracks…nothing like it is today.” 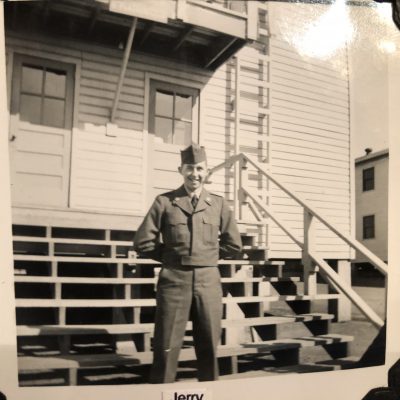 After Basic Training ended, Wentlandt stayed in Camp Chaffee for four extra weeks, where he took a Fire Direction Control (FDC) course. When that was finished, he was able to go home for 10-15 days and then received his shipping orders. “If you got orders to report to New York or New Jersey, you were probably going to wind up in Germany,” Wentlandt said. “If you were to report to Fort Lewis, you were probably going to end up in Korea. I read my orders and I had to go to Fort Lewis. I waited two weeks for more orders and one day the sergeant comes walking through the barracks telling us to pack up and move out. It turned out that the last four guys on the roll-call roster were being sent to Alaska.”

Wentlandt shared that once the weather hit 40 degrees below zero, there was nothing they could really do except keep warm and keep the vehicles running. “When I reported to headquarters, they asked me if I could type…I couldn’t,” he said. “They were just filling holes where they needed someone. I wound up in FDC battalion. At the time, there was only one railroad connecting Anchorage to Fairbanks. There were no roads that went into Fairbanks because of the mountains and rivers. It was really cut off up there. The Northern Lights you could really see. I went back 50 years later and Fairbanks hasn’t changed.”
Wentlandt’s service ended in 1954 and he went back to Milwaukee to finish his apprenticeship. After that, he worked at Trade Press until he eventually retired. 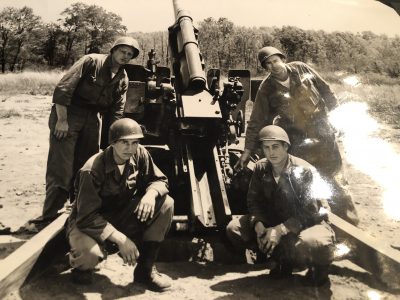 Not long after his service ended, Wentlandt and his friends went to The Eagles dance hall one evening. It was there that he met his wife, Joan. Together, they have two children, six grandchildren, and soon will have five great-grandchildren.
“My son, David, is the Police Chief in Butler,” said Wentlandt. “He wanted me sign up for the Honor Flight. I didn’t really want to at first. I thought this Honor Flight was for the guys that actually saw action, but David said that I could and should go. David goes down there and helps get things organized for the Honor Flights and he was really the one that talked me into going.”