March 21, 2019 – West Bend, WI – It was May of last year when Ric Koch found a Great Horned owl nesting in what looks like an old vent in the side of the old Lithia Brewery building on Franklin Street.

Koch moved into Rivershores and was out on his bike when he spotted the trail of dung on the side of the building. Next he saw the baby owl. While we were filming the mother owl flew the coop. (what are the chances?)

Located below the nesting site is a rather graphic collection of last night’s dinner.  Koch said owls will take in food and then yack up hair and bones and what not; a lot of that is in a small grassy area right under the nest. (you have been warned)

Property Restoration Professionals came on scene and managed a couple photos of the baby owl and Greg Lofy from ASP Images captured the mother owl sitting in a tree along the Milwaukee River. 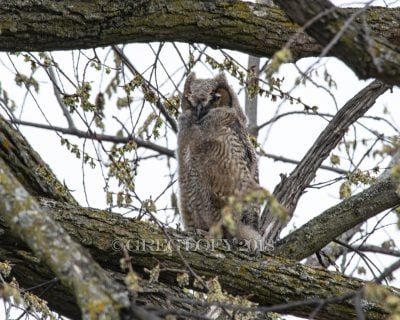 Calls were placed to Law Lawrann Conservancy to see if someone could identify the species and we were between a Great Horned Owl, a Burrowing Owl  or even a Screech Owl.  ( no Saved By the Bell jokes please).

Chris Schmidt, who owns the brewery building, stopped to take a look. The conversation gravitated to what happens when the baby tries its first flight? The nest is about 25 feet off the ground and below is cement. Schmidt, who rents space in the building to the West Bend Dance and Tumbling Troope, suggested he go inside and bring out a couple of tumbling mats to help cushion the fall.

Now the mother owl has returned and a passerby on Tuesday said he’s already seen a couple of white tufts, possibly owlets, in the nest.

If you happen by and don’t see the mother owl, take a look in the surrounding trees by the Milwaukee River. That’s good hunting area for them.  Feel free to add your owl photos to the mix.