August 27, 2018 – Jackson, WI – Tim Halbach with the National Weather Service spent some time in Jackson on Monday morning, August 27, reviewing the flooding and looking at the path of the storm.

Strong winds and sheets of rain doused much of Washington County on Sunday night and again into early Monday morning.

Halbach said there was some rotation on radar and the strength of the storm hit Jackson pretty hard with downed trees and flooding. “We’re just trying to piece together what we saw  and whether this was straight-line wind damage or a tornado,” he said. 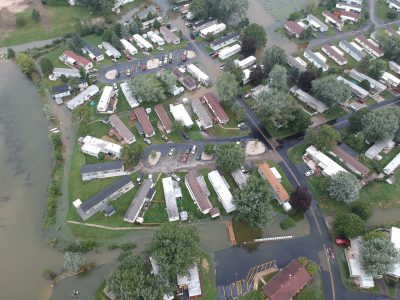 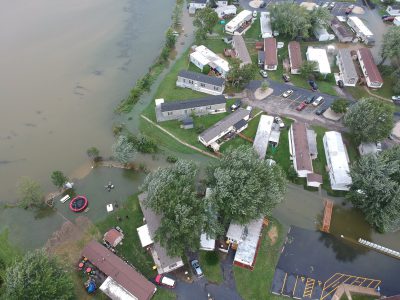 “With down-burst winds everything it looks like it’s pushed down and it’s more sporadic and with a tornado it’s more lofted and you’ll see splatter against the house,” Halbach said.

The National Weather Service said it saw a “brief spin up.”

“There was some rotation for a bit unfortunately it happened to strengthen over Jackson which prompted the tornado warning but we don’t have a lot of damage to structures just a lot of tree damage at this point,” said Halbach.

He said nobody was hurt and the flooding should subside. Vossekuil warned motorists to avoid driving through standing water if they didn’t know how deep it was.

Kaylyn Malandrone lives in Green Valley and she went exploring this morning and waded into water past her hips.  The kids were sloshing though the water and thought it was “great.”

The National Weather Service has issued a statement saying a “storm survey found sporadic wind damage across Washington County… concentrated near the Town of Jackson. No evidence was found of a tornado.”