Nov. 11, 2018 – West Bend, WI – Chilly temps did not deter neighbors in West Bend from turning out Sunday, Nov. 11 to pay their respects during the Veterans Day ceremony at the Old Courthouse Plaza on Fifth Avenue and Poplar Street.

West Bend Police Lieutenant Matt Rohlinger called and “about face” and members of the West Bend PD turned to face the east.

Sirens across Washington County sounded marking Armistice Day and the anniversary of the end of World War I. 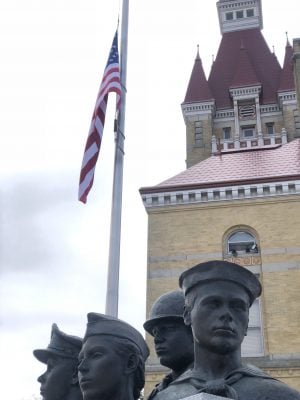 “One hundred years ago on the 11th hour of the 11 day on the 11th month in 1918 the Great War, the war to end all wars finally ended. Originally created in recognition of the end of WWI the first Veterans Day was observed Nov. 11, 1921 at Arlington National Cemetery and it was marked by the burial of the Unknown Soldier from WWI. One hundred years later as we gather to reflect to those who have fought to preserve the freedom every American enjoys there are thousands of men and women in our military right now once again taking up arms against the enemies of our way of life.” 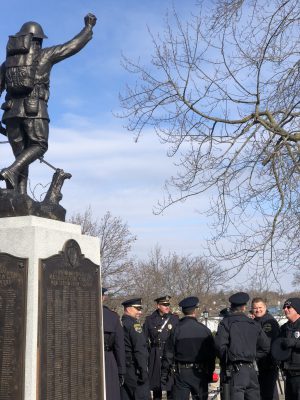