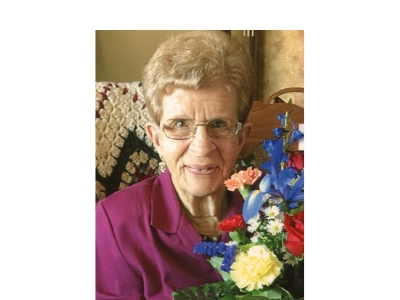 Arline was born on March 18, 1932, in Fond du Lac, the daughter of the late Ernst and Selma (nee Kollmann) Hoffmann. Arline graduated from Dodge County Normal School in 1951 and taught for seven years for rural country schools in Fond du Lac County. On November 30, 1957, she was united in marriage to Lloyd Weninger at St. Mary’s Catholic Church in Lomira where she continued to be a faithful member of the church. She farmed with her husband and raised eight children. Arline worked at California Canners and Growers for 9 years beginning in 1970. Lloyd preceded Arline in death on January 5, 2007.

Arline was active as a 4-H member and continued on as a leader for the South Byron 4-H Club. She enjoyed sewing, quilting, cross stitching, cooking for her family, and gardening. Arline volunteered at the polls and was an avid reader. She loved spending time with her children and grandchildren.

Funeral services for Arline will be held at 1 p.m. on Tuesday, March 12, 2019, at St. Mary’s Catholic Church, 699 Milwaukee Street, in Lomira. Rev. Michael Petersen will officiate and burial will follow in the parish cemetery.

Arline’s family will greet relatives and friends at the church on Tuesday from 10 a.m. until the time of Mass.