Tommy and Kathey will open the store at 10 a.m. and they’ll have heaps of juicy corned beef on rye bread ready to go.

Tommy O’Schwai has been celebrating St. Patty’s since he can remember…. “One name, Bruce Weninger. I was 16 years old and it was the first time I got drunk,” said Tommy. “Bruce came home from the service and he kept buying old fashioneds and I kept drinking them. Yup…. it was a rough day at school the next day.”

Tommy remembers the dancing that went on at the old Schwai’s in Cedar Creek; currently Bibingers. “The floor would bounce there would be so many people up there dancing,” said Tom. “You couldn’t fall over if you wanted to we were packed so tight with people.” 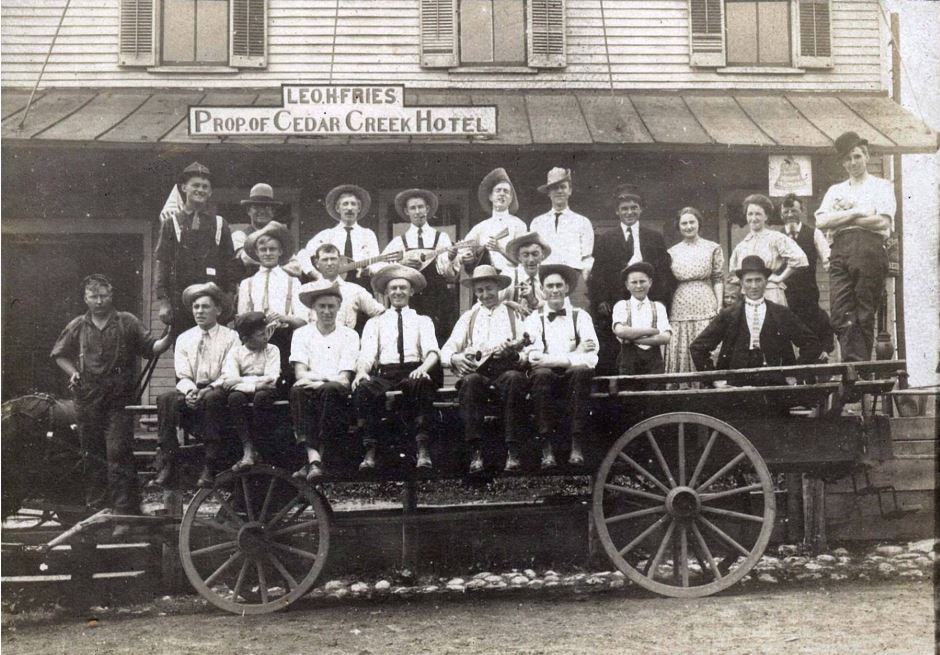 The interior demolition is halfway complete at the former Schwai’s in Cedar Creek. Owners Kevin and Amy Zimmer purchased the building, 3747 Cedar Creek Road, last August and since then they’ve been working to remodel, open the space and eventually lease or sell to a new business.

There are still many signs and smokehouse smells of the old Schwai’s which dates to the days of the family-run operation in the 1950s by Joe and LuAnn Schwai.

During a Sunday morning tour Kevin Zimmer walked past the front bar which is draped in a now dusty plastic. Crews spent the past months ripping down walls exposing hand-hewn beams.
“This is what’s overwhelming,” Zimmer said as he carefully maneuvers over huge slabs of concrete next to the old smokehouse. “We got rid of the old walk-in butcher cooler and sold it to a guy in Delafield. But this old hard concrete wall around it has proven to be a bear.”

Zimmer takes a couple strikes with a sledge hammer. “We want to open up the dining area,” he said. “We’ll put in an ADA bathroom over here, the women’s bathroom will stay the same and hopefully we’ll be able to put in a new flight of stairs for easy access to a banquet facility upstairs and storage in the basement.”

Outside the split-face granite stone from the 1970s will remain as the plan is for a raised masonry area that will be poured to feature outdoor dining on the east end of the building, previously a parking area.

Over the next two years the layout of Highway C will be under construction. Zimmer said that work gives them a “no-pressure window” to complete their remodel.

Inside, six sheets of rolled up note paper dated April 24, 1972 and a message written in cursive by long-time store owner Lu Ann Schwai.

“Hi! We are remodeling this place to make it larger for our tavern and bottle goods business,” read the note. “The reason we are discontinuing the store is because the large chain stores are open on Sunday. We will keep on with our homemade sausage until the State Health Dept. would close us up.” 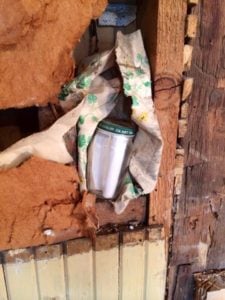 There’s a paragraph in the note on the history of the building, the business which dates to 1941 and an update, July 1, 1957, highlighting when ‘Joe and Lu Ann bought’ the building.

Zimmer has rehabbed quite a few old buildings but said there’s nothing like finding something intentionally put into a wall that was meant to be discovered later.

“The note shows the Schwai’s have a very strong family bond,” Zimmer said. “They were passionate about what they were doing, passionate about the building but more importantly they were a family making changes and decisions they thought were right for the day.”

Tommy Schwai, owner of Schwai’s Meat & Sausage in Fredonia, sold the Cedar Creek building in 2005. “That sounds like something ma would do,” said Schwai about the note in the glass jar. “She always said when they rip up the wall and find it they can read about what happened. Too bad she didn’t put any money in there.”

The Washington County Historical Society shows the building dated to the 1800s and was normally home to a saloon, dance hall, and/or hotel. Early names associated with the property include the Bibinger family (1846), A.B. Mueller Hotel and Sample Room (early 1920s), Albert Heidtke (who built a slaughterhouse) and previous owner Peter Gruehl (some spelled it Gruel) who sold to Joe Schwai Sr.

At the end of the note Lu Ann Schwai writes, “The Schwai’s from God’s Country. The center of the world where all good friends meet.”

“We had some really good parties, went through a lot of half barrels and gave a lot of money to Threshold,” he said.

“Marvin Stuffel came and down and I think it was one of their pigs we dyed green. For every pitcher of beer we sold we gave $1 to Threshold and we served 500 pounds of corned beef that day. Cookin’ it in kettles.”

“You had every Tom, Dick and Harry out there. You had Tom Rolfs and all the Zieglers, you had Chuck Hense come and get drunk, you had Bernie and Brad Benz; a lot of people, a lot of regulars.”

“The Tiddlywinks was my ma’s thing. My dad didn’t want to and he was mad but when he found out how much money she made he wanted to do another one right away.”

“Many a drunks went out of there. They were drinking Lithia and Old Timers…. that was some good stuff. We had ham sandwiches and brats. It was a long day but it sure was fun!”

If you want more of the local celebrity Tom Schwai – CLICK HERE for his famous tour of the new Fleet Farm in West Bend.

Watch for more history on the old Schwai’s in Cedar Creek on Monday, March 16 at WashingtonCountyINsider.com