March 9, 2019 – Slinger, WI – It was a sold-out show Friday night at the Slinger High School Performing Arts Center as the UW Marching Band performed a nearly two-hour show under the direction of Mike Leckrone.

It was a special performance that was three years in the making. The evening was sponsoring by the Slinger/Allenton Rotary and the event coincided with the 150th anniversary of the Village of Slinger. 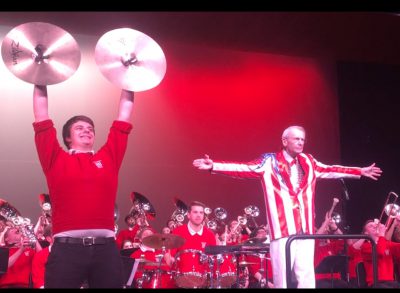 The UW Marching Band warmed up the crowd as the seven tuba players ducked through the entryway and took their place in front of the stage. “How’s everybody doing tonight,” yelled the tuba player. “Ready for some fun.”

Then it was onto some classics including “When you say Wisconsin you’ve said it all” and “On Wisconsin.”

Dressed in black pants and red sweaters emblazoned with the letter W the band followed some brief comments from the Rotary, Village President Russell Brandt and Slinger Superintendent Daren Sievers. 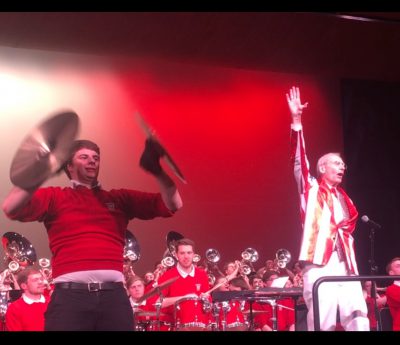 Some of the music included a medley from Lionel Richie,  Neil Diamond, Frankie Valley, The Music Man, and Jesus Christ Superstar.

Then the band jumped into the traditional Fifth Quarter with The Chicken Dance, Hey Baby, and the Beer Barrel Polka.

Leckrone was dressed in white pants and tennis shoes and a flashy red and white striped jacket. The 82 year old announced in 2018 that after 50 years at the helm this would be his last season with the Marching Band.