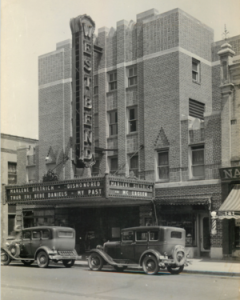 Positive news during Monday night’s West Bend Common Council meeting as aldermen gave their blessing to members of the West Bend Cultural Alliance as it moves forward in an effort to reopen the West Bend Theatre and save the bridge out back over the Milwaukee River.

The support also came with a word of warning. District 6 alderman Steve Hoogester, a former West Bend police officer, told members of the WBCA in attendance that they better have a plan for security on the bridge. “As a police officer that bridge was a nightmare,” he said noting he answered calls for things like disorderly conduct, assault, and drugs. “You need to figure out a way to make it safe.”

All members of the council reacted positively to the $75,000 surety put up by the Downtown BID Board. District 2 alderman Steve Hutchins admonished the group in a light-hearted fashion for coming to the table a little late with their idea. “I think the theatre should be fixed as long the taxpayers are protected,” he said, making clear he did not want neighbors to get hung up on the deal.

Kevin Zimmer, who was dubbed “the glue” of the project, agreed to be the point person to keep the council informed. Zimmer explained how necessary studies were underway, committees were in place and a plan was being put together.

The bridge is currently owned by the city. Sadownikow said how the project moves forward is still being determined.

Overall the mood in the council chambers from all parties involved was positive.

“You can’t afford not to get ‘er done,” said Don Held, a transplant from Sheboygan and an integral part of revitalizing the old Sheboygan Theatre.

“Nineteen years ago I was part of a group to save the Sheboygan Theatre,” he said. “It took us five years to save it but it’s a gem in the community and I challenge the city and everybody to save it.”

The next meeting with more theatre discussion is Jan. 18.

The WBCA said, moving forward, it’s working on hosting an open house at the West Bend Theatre and holding forums to take suggestions on what the community would like to see in the theatre on Main Street.