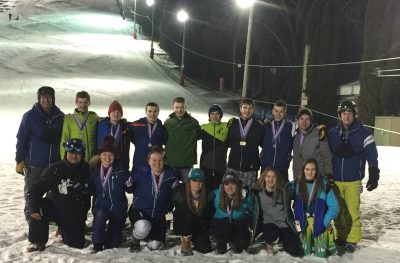 Jan. 30, 2018 – Washington Co., WI – The West Bend co-op Alpine Ski Team is preparing to qualify for state after a great season so far.

The varsity girls team is tied for first with Mukwonago and Arrowhead High Schools with 48 points each.

Jon Sison is head coach of the West Bend CO-OP Alpine Ski Team. “This team is small in numbers but are they fast,” said Sison.

The Midwest High School Ski Conference consists of 21 boys varsity and 21 girls varsity teams; it is the largest in the state of four conferences.

Starting in January all teams race six races thru the beginning of February.

Currently the teams are in the fifth week of races. After the sixth race the top 12 teams will compete against the rest of the best in the state at Mt. La Crosse on Feb. 18 and 19.