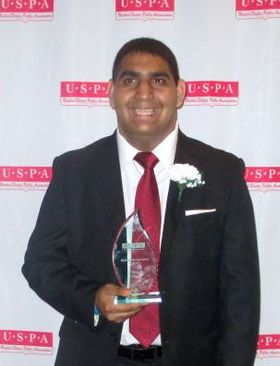 The USPA is one of two major polka music associations in the United States dedicated to the promotion of the Polish genre of polka music.
The New Horizon Award is given to an outstanding young (under 21) musician who has demonstrated extreme accomplishment in performing polka music. 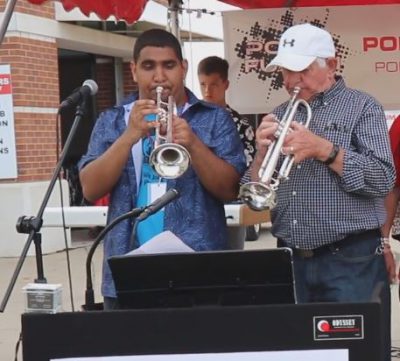 The USPA award was presented to Heger by Allen Bales, the leader of the Julida Boys Band which has played polka music in the Washington County area and beyond for the past 40 plus years.
Bales was Heger’s first trumpet teacher and ultimately became a great mentor and friend after he discovered a very young Joe playing along and twirling his plastic toy trumpet to the music of Hank Guzevich and his Polka Family Band at the West Bend Germanfest about 13 years ago.
Heger has been busy this summer performing with his own Polka Fusion Band and with the Chad Przybylski Band from Pulaski, WI.
Since June he has logged more than 20 performances including Milwaukee Polish Fest and the Minnesota State Fair.
Heger be at The Milwaukee Brewing Company and La Crosse Oktoberfest later this month.