A West Bend man said he stopped at Fleet Farm on 18th Avenue in West Bend a little after 5 p.m. Thursday to do some shopping when police screamed into the parking lot, guns drawn and ordered a man out of a pickup.

“I was standing in the parking lot at Fleet Farm, a safe distance from where police were with this guy in the Ford,” said a man who preferred to be identified as T.C. 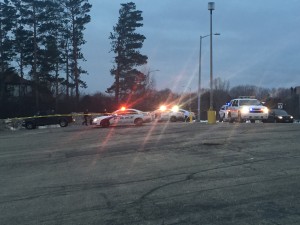 “It appeared police tried to throw spike strips into the road to stop the green pickup which was eastbound on Highway 33 and then turned south onto 18th Avenue,” he said.

“I think they missed with the spike strips and then the guy got to the last entrance to Fleet, turned in and two city police were behind him,” said T.C.

“He opened the driver’s door like he was going to get out and police were yelling at him to put his hands up and get out of the vehicle. They wanted him to get out backwards and he wasn’t listening at all.

“He was standing on what appeared to be a running board on the side of the truck and was completely ignoring the police commands to get out of the truck,” he said.

Police reportedly had AR-15 rifles pointed at the man and Washington County Sheriff’s arrived on scene. Five city police were on scene as was police chief Ken Meuler.

“There was a lot of (police) yelling at him to walk away from the vehicle and eventually he stumbled out of the truck and dropped to his knees in the parking lot,” T.C. said.

Police took the man into custody. “I know they had gloves on and the man was bleeding,” said T.C.

Fleet Farm was on lock down during the incident.

The man in custody is was described as a white male. No shots were fired.

http://www.washingtoncountyinsider.com has calls out to police.