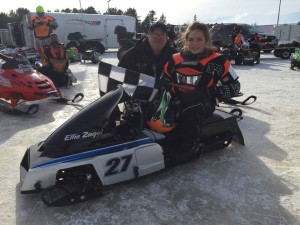 If you happened to be up in Eagle River for the World Championship Snowmobile Derby earlier this month you would have seen a little sprite of a girl in the winner’s circle. Ellie Zagel is 10 years old, a fifth grader at St. Peter’s School in Slinger and a fierce competitor on the track.

She repeated the trip to the winner’s circle last weekend during the Wausau 525 at the Badger State Games. Ellie is almost 5-feet tall, she likes math and describes herself as athletic, coordinated, flexible and caring. “I like to do gymnastics, dancing and singing and I like to play piano,” she said.

‘Dork Diaries’ by Rachel Renee Russell is currently atop her reading list.

Put Ellie on a snowmobile and this sweet little girl who talks in a sing-song fashion morphs into a tough-as-nails racer who hangs off the side of her sled as she digs into the turn and races into the straightaway at 40 miles an hour.

It’s become habit to take the checkered flag. “When I was 4 my dad put me on a snowmobile and I guess I liked it,” said Ellie. “I’ve been racing for seven years and I just kept racing and getting into bigger classes.”

Now she races in the Champion F1 Modified Class. “It’s extremely unique that she’s a girl and she’s winning,” said dad Troy Zagel. “You have to be fearless. They’re on glare ice and some lap times are 8 to 10 seconds. I’d be scared to death.”

Mom, Penny Zagel, is a fixture on the sideline; confidently cheering on her daughter, posting pictures of her daughter’s race victories and medals on social media.

The snowmobiling schedule is demanding for the Zagel family as most weekends find them traveling far north, to colder temperatures and more snow. Road trips this season have been to Ironwood, Michigan, Eagle River and Gleason, Wisconsin.

There’s a renewed comfort to the busy travel as at the end of last season, Ellie officially retired.
“I didn’t want to race anymore so I kinda gave up in the middle of the year at the World Championships,” she said. The last race, she celebrated with cake. “It had ‘Ellie has retired’ printed on the cake and I smashed it in my face,” she said.

Her dad sold the equipment, the gear, the sleds. Ellie focused on other things, relaxed and then started thinking about her friends. “I just thought I’d lose a lot of friends because we wouldn’t go anymore,” she said.

The race was back on,  especially for dad who had to borrow a couple sleds to get his daughter back onto the track for the 2016 season.

With a whole new outlook and renewed spirit, Ellie is stepping on the gas and bringing home the hardware.